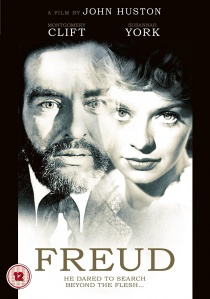 Frued, released on DVD on 23rd April 2012 by Transition Digital Media is very much a forerunner of David Cronenberg's recent and critically acclaimed A Dangerous Method. Legendary director John Huston (Prizzi's Honor; The Man Who Would Be King; The Asphalt Jungle; Moulin Rouge; The African Queen; The Maltese Falcon) approaches his biopic of one of the world's most famous psychoanalysts as one would a noir-ish crime thriller, making his take on Sigmund Freud's compelling story all the more fascinating and original.

Vienna, 1885 and gifted young neurologist Sigmund Freud (Montgomery Clift) has begun to experiment with the use of hypnosis in the treatment of two psychotic patients, one a young man (David McCallum) with an obsessive hatred of his father, the other a young woman named Cecily Koertner (Susannah York) whose deep-rooted mental problems repeatedly manifest themselves as debilitating physical ailments.

Freud stars Montgomery Clift (From Here To Eternity; A Place In The Sun), Susannah York (Superman; A Man For All Seasons; They Shoot Horses, Don't They?), Larry Parks (The Jolson Story) and David McCallum (NCIS: Naval Criminal Investigative Service; the Replacements).

DVD
For the first time in the cinematic history of Spider-Man, our friendly neighborhood hero's identity is revealed in Spider-Man: No Way Home, released on DVD, Blu-ray and 4K UHD 4th April 2022 from Sony Pictures Home ... END_OF_DOCUMENT_TOKEN_TO_BE_REPLACED
Top PicksView