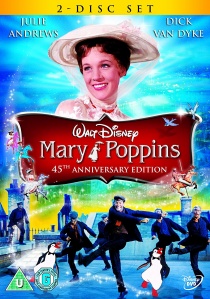 Fresh from her supercalifragilistic run in Cameron Mackintosh's West End show, Mary Poppins, the world's most famous nanny is back on the small screen from 2nd March 2009 to celebrate the 45th anniversary of one of the most popular musicals of all time.

Enjoyed by families all over the world for almost half a century, the special edition DVD gives parents a chance to introduce a new generation of children to the Oscar® winning classic, complete with enhanced picture and sound quality.

Pulling even more special features out of Mary's carpetbag, the two disc DVD is also full of bonus material including a never before seen insight into the journey of Mary Poppins from page to stage and 'Step in Time', a filmed musical number exclusive to the Broadway production and seen by few in Britain. Young and old can sing along with Mary (Julie Andrews) and 'Cockney' chimney sweep Burt (Dick Van Dyke) to the Sherman Brothers' unforgettable songs including A spoonful of Sugar, Let's Go Fly a Kite, Supercalifragilisticexpialidocious, Feed the Birds and the Oscar® winning, Chim Chim Cheree.

Winner of five Academy Awards® including Best Actress for Julie Andrews, the 'practically perfect in every way' film invites old and new fans into the world of the Banks children. Along with their new nanny Mary Poppins and her friend Burt, the children experience a whirlwind adventure involving tea parties on the ceiling, dances on the rooftops of London and jumping through chalk drawings into an animated world, as Mary Poppins blends live action with animation.

Don't miss the chance to own this iconic family favourite when it sings and dances its way onto Disney DVD this March.