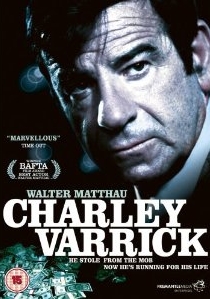 A timely reminder of why many cinema fans regard the 1970s as a golden decade for movies, the hugely entertaining, hard-edged crime thriller Charley Varrick comes to DVD from 27th October 2008 for the first time ever in the UK from Fremantle Home Entertainment.

Regarded as one of the key influences on Quentin Tarantino's Pulp Fiction (particularly regarding Ving Rhames' infamous line about going to work on someone with 'a pair of pliers and a blow torch' and the naming of Duane Whitaker's character, 'Maynard'), Charley Varrick, with its cracking dialogue, pitch-perfect performances by the cast, and effortlessly assured direction by Siegel, is simply one of the greatest crime movies ever made.

Directed by Don Siegel (Dirty Harry; Coogan's Bluff; Invasion Of The Body Snatchers) and starring Oscar winner Walter Matthau (The Odd Couple; I'm Not Rappaport; Grumpy Old Men), who won the BAFTA Award for Best Actor for his performance in the film, the film co-stars Joe Don Baker (The Outfit; Junior Bonner), John Vernon (Animal House) and Andrew Robinson (Hellraiser; Dirty Harry) in a violent and uncompromising thriller that sees Matthau at the top of his game.

Playing against type and displaying his exceptional versatility as an actor, Matthau stars as Charley Varrick, a former flying circus clown turned crop duster now taken to robbing banks with his wife (Jacqueline Scott) and a couple of his employees, one of whom is hot-headed kid Harman Sullivan (Robinson). The gang's most recent job, a seemingly simple heist on a small-town bank in Tres Cruces, New Mexico, goes wrong in more ways than one, leaving four dead, including two of Charley's crew. Worse, the unexpected size of the take -- $750,000 -- leads Charley to suspect the bank is an illicit 'drop' for a Mafia money-laundering outfit.

Charley's suspicions prove to be true and the mob, eager to recover its money and to send a deadly warning out to the rest of the underworld, despatch a ruthless hitman, Molly (Baker), to track down and deal with the suspects. With both the cops and the mob on his tail -- not to mention having to deal with the liability of a volatile partner intent on openly living the high life -- Charley is forced to rely on his wits just to make it through another day. If he hopes to live any longer, he knows he is going to have to confront the threat head-on and end the trail that is leading Molly and the authorities to him.