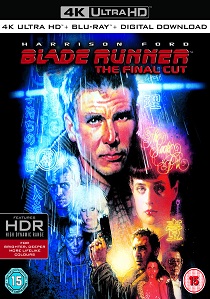 To celebrate the 35th anniversary of the sci-fi classic, Blade Runner: The Final Cut will be released by Warner Home Video on 4K UHD on 4th September 2017, 4K UHD Special Edition on 25th September 2017 and Blu-ray Steelbook on 13th November 2017.

Directed by Sir Ridley Scott (Gladiator, The Martian, Alien Covenant) and starring Harrison Ford (the upcoming Blade Runner 2049) as Rick Deckard, Blade Runner is widely accepted as one of the most important science-fiction movies of the 20th Century with immeasurable influence on society for its futuristic depiction of a post-apocalyptic, dystopian world. The film has appeared on more 'Top Five' sci-fi lists than any other film.

Upon it's original release in 2007, director Ridley Sir Ridley Scott said: "The Final Cut is the product of a process that began in early 2000 and continued off and on through seven years of intense research and meticulous restoration, technical challenges, amazing discoveries and new possibilities. I can now wholeheartedly say that Blade Runner: The Final Cut is my definitive director's cut of the film." UHD showcases 4K resolution with High Dynamic Range (HDR) and a wider colour spectrum, offering consumers brighter, deeper, more lifelike colors for a home entertainment viewing experience like never before.

For the complete 4K UHD experience with HDR, a 4K UHD TV with HDR, a UHD Blu-ray player and a high-speed HDMI (category 2) cable are required. The UHD Blu-ray disc of Blade Runner: The Final Cut will feature a Dolby Atmos® soundtrack remixed specifically for the home theatre environment to place and move audio anywhere in the room, including overhead. To experience Dolby Atmos at home, a Dolby Atmos enabled AV receiver and additional speakers are required, or a Dolby Atmos enabled sound bar; however, Dolby Atmos soundtracks are also fully backward compatible with traditional audio configurations and legacy home entertainment equipment.

21st-century detective Rick Deckard brings his masculine-yet-vulnerable presence to this stylish noir thriller. In a future of high-tech possibility soured by urban and social decay, Deckard hunts for fugitive, murderous replicants - and is drawn to a mystery woman whose secrets may undermine his soul.