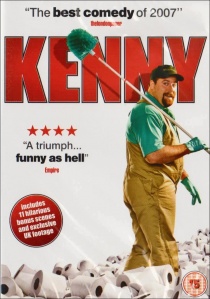 A runaway box office smash propelled by positive word-of-mouth from cinemagoers in its native Australia and hailed as "the best comedy of 2007" by the London Paper during its UK cinema release, Kenny, released by Contender Films on 21st January 2008, is a funny, touching and beautifully observed mock documentary straight out of the Christopher Guest (Best In Show; A Mighty Wind) school of filmmaking.

A cheerfully amusing flush of toilet humour in the most literal sense, Kenny takes as its focus the hero of the title, an affable waste management plumber with a disarmingly infectious enthusiasm for life no matter what it throws at him. The number one when it comes to number twos, Kenny Smyth (Shane Jacobson) is in the business of taking care of 'business', delivering and installing Portaloos to corporate and public events.

From the smallest of local fetes to Australia's biggest rock festivals and even the prestigious Melbourne Cup horse race, as far as Kenny and the rest of the Splashdown crew are concerned, every job is a big job. On top of having to deal with being up to his neck in sewage every day, Kenny also has to cope with a bullying harridan of an ex-wife, a judgemental father and an embarrassed young son, not to mention the often-erratic behaviour of his Splashdown colleagues.

Taking the good and the bad in his stride with unflappable optimism, Kenny is duly rewarded with an all-expenses-paid business jaunt to the Mecca of waste management, the International Pumper and Cleaner Expo in Nashville, Tennessee. During the trip he catches the eye of an airline stewardess after repairing the malfunctioning toilet on her plane and begins a heart-warmingly innocent romance with her that ultimately leads to the biggest jackpot of his life.

Co-written by real-life brothers, director Clayton Jacobson and star Shane Jacobson, Kenny is engaging, charming and sweet without being sugar coated. Never once resorting to crudity, despite its subject matter, it's an irresistible and uplifting comedy about a loveable, optimistic everyman whose glass is always half full.