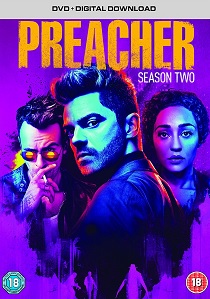 The extended second season is an absurdly twisted, action packed thrill-ride following Jesse Custer (Dominic Cooper, TV's Agent Carter, Captain America: The First Avenger), a small-town preacher with a criminal past who sets out to find God upon learning He is absent from Heaven. Along for the ride are his ex-girlfriend Tulip (Academy Award® nominee Ruth Negga, Best Actress, Loving, 2016, TV's Agents of S.H.I.E.L.D.) and his best mate Cassidy (Joseph Gilgun, This is England, TV's Emmerdale), an Irish vampire. Finding themselves in New Orleans, the gang must dodge local gangsters, dangerous secret agents and the Saint of Killers (Graham McTavish, TV's Outlander), an unstoppable murderous cowboy from Hell.

Preacher: Season 2 contains all 13 episodes in three-disc Blu-ray and DVD sets. Along with the gag reel, featuring hilarious moments from the cutting room floor, is the featurette Raising the Stakes: Action on Set, where the cast and crew explain why Season Two is filled with more action, blood and gore than ever before as we follow along on-set for one of the biggest fights of the season from the episode "Damsels."

The second season of Preacher is a genre-bending thrill ride that follows West Texas preacher Jesse Custer (Dominic Cooper), his badass ex-girlfriend Tulip (Academy Award® nominee Ruth Negga, Best Actress, Loving, 2016) and Irish vampire Cassidy (Joseph Gilgun) as they embark on a road trip to find God and are thrust into a twisted battle spanning Heaven, Hell and everywhere in between.