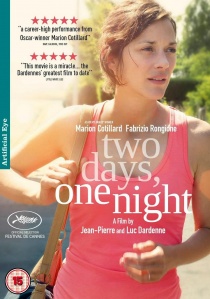 In what is already being heralded as one of her greatest performances, Marion Cotillard (Rust and Bone, Midnight in Paris) plays Sandra who has her employment threatened by the very people she works with when, behind her back, upper management offer the workforce a significant bonus if they vote for Sandra to lose her job.

With only a single weekend to spare she must confront each of her co-workers and persuade them to change their decision so she can maintain her livelihood. Join Sandra on her precarious, humbling and inspirational journey.

Directed by The Dardenne Brothers, who are the most celebrated and decorated filmmaking partners in the world, boasting five Cannes wins and countless other international awards, Two Days One Night is released on DVD and Blu-ray by Artificial Eye on 20th October 2014.