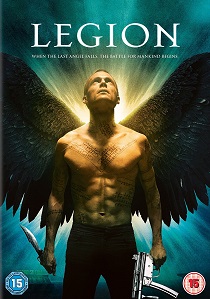 Momentum are pleased to announce the release of the action-packed supernatural thriller Legion on Blu-ray and DVD on 9th August 2010, from Sony Pictures Home Entertainment.

Scott Stewart, the visual effects wizard behind some of Hollywood's biggest blockbusters, including Iron Man, Pirates of the Caribbean: At World's End and Harry Potter and the Goblet of Fire, makes his stunning directorial debut with this suspenseful, visually breathtaking story about a small band of human survivors struggling to fend off an army of vengeful supernatural beings.

At a remote desert truck stop, the fate of the world will be decided. Evil's armies are amassing. Armed and united by the Archangel Michael (Paul Bettany), a group of strangers become unwitting soldiers on the frontlines of the Apocalypse. Their mission: protect a waitress and her sacred unborn child from the relentless, bloody siege of the demonic legion.

HotDVDBDUHD
Yet to fulfill their rock and roll destiny, the now middle aged best friends set out on a new adventure when a visitor from the future warns them that only their song can save life as we know it as Bill & Ted Face The Music is released on DVD, Blu-ray and 4K UHD 25th January 2021 from Warner Home Video. END_OF_DOCUMENT_TOKEN_TO_BE_REPLACED
Hot PicksView