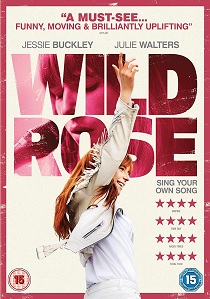 Fresh out of jail with two young kids in tow, Rose-Lynn dreams of getting out of Glasgow and making it as a country singer in the USA. Her mum Marion (played by Julie Walters - Billy Elliot, Paddington) has had a bellyful of Rose-Lynn's Nashville nonsense and urges her daughter to focus on supporting her children.

Forced to take responsibility as a mother, Rose-Lynn gets a cleaning job, only to find an unlikely champion in the middle-class lady of the house (played by Sophie Okonedo - Hotel Rwanda).

In this coming-of-age tale, Rose-Lynn comes to realise that the path to living out her dreams may be closer to home than she thinks. This is an uplifting and moving comedy drama about mothers and daughters and dreams and reality.

Wild Rose, released on DVD 19th August 2019 from Universal Pictures (UK), is a heart-warming and feel-good new film that tells the story of a free-spirited young singer Rose-Lynn Harlan (played by Jessie Buckley - Taboo, War & Peace) who is bursting with raw talent, charisma and cheek.

But will she escape the shackles of Glasgow and her roots to follow her dreams of Nashville?

Get fired up for the ultimate action-fest Skyfire, a thrilling new disaster movie from lauded director Simon West, released on DVD and Blu-ray 23rd November 2020 courtesy of Patriot Films.