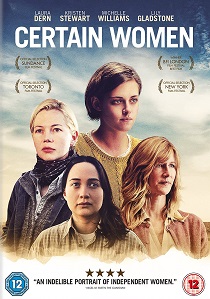 Four women strive to forge their own paths amidst the wide-open plains of the American Northwest. Laura (Dern) is a lawyer who finds herself contending with both office sexism and a hostage situation. Gina (Williams) is a wife and mother whose determination to build her dream home puts her at odds with the men in her life. And Beth (Stewart) is a young law student who forms an ambiguous bond with a lonely ranch hand (Gladstone). As their stories intersect in subtle but powerful ways, a portrait emerges of flawed yet strong-willed individuals in the process of defining themselves.

3D-BD
The grave course of events set in motion by Thanos that wiped out half the universe and fractured the Avengers ranks compels the remaining Avengers to take one final stand in Marvel Studios', Avengers ... END_OF_DOCUMENT_TOKEN_TO_BE_REPLACED
Hot PicksView