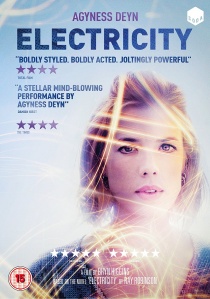 Based on the novel by Ray Robinson that the Guardian called "a breath-taking assault on the senses", Electricity, released on DVD by Soda Pictures on 6th April 2015, combines passionate drama with stunning special effects in a powerfully uplifting story.

Lily O'Connor is a witty and searingly defiant Northerner with epilepsy and a tough past. When she finds out that the brother she's long thought dead could still be alive, she risks her life to go in search of him. As she abandons her safe routine in a seaside town and heads into the treacherous underbelly of London she takes us on a deeply moving trip that really is like nothing you've seen before. Will Lily's bravery help her connect her past and her future - or will she die trying?