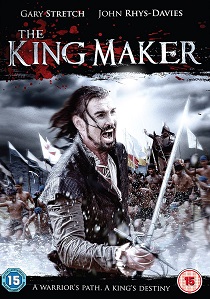 Based on the true story of a murderous queen, who, in 16th century Siam, plotted the murder of her husband so her lover could accede to the throne, the historical action epic The King Maker, released on DVD by Anchor Bay Entertainment on 21st March 2011, stars Gary Stretch (World Trade Center; Alexander), John Rhys-Davies (Lord Of The Rings; Indiana Jones And The Last Crusade) and former Miss Thailand Cindy Burbridge (A House Of Mad Souls) in a swashbuckling, martial arts adventure packed with sword-wielding warriors, ninja assassins, heroic battles and political intrigue.

Seeking revenge on the man responsible for his father's death many years earlier, Portuguese mercenary Fernando De Gama (Stretch) sets sail on a warship bound for the Orient but finds himself shipwrecked, captured by Arab traders and put up for auction as a slave. He is rescued by a beautiful woman, Maria (Burbridge), who buys him back his freedom and introduces him to her father, Phillippe (Rhys-Davis), who Fernando immediately recognizes as a sinister face from his past.

Subsequently pressed into military service in support of Chairacha, King of the Ayutthaya kingdom of Siam, Fernando's courage on the battlefield and his part in thwarting an assassination attempt on the king earn him the distinguished position of royal bodyguard. But when Fernando discovers who is behind the treasonous plot, he becomes implicated in the scheme and must fight to prove his innocence before the kingdom is thrown into a state of bloody war.

Produced by David Winters (The Last Horror Film) and directed by Lek Kitaparaporn (Angkor: Cambodia Express), The King Maker is only the third Thai feature ever to be shot in the English language (the first since 1941) and features numerous visually impressive sequences shot in some of the country's most stunning and breathtaking locations.