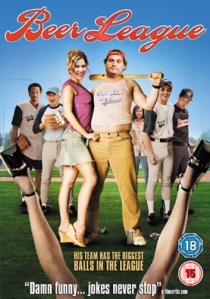 NewsComedy
News Article Go back to homepage
A gloriously unabashed throwback of a comedy that gleefully hurls any pretensions to political correctness right out of the window from the get-go, Beer League, released on DVD by Scanbox Entertainment on 21st January 2008 does for softball what Caddyshack did for golf.
Joe Lo Truglio, Jimmy Palumbo, Cara Buono, Anthony DeSando, Ralph Macchio, Artie Lange
Frank Sebastiano
Jeremy Dallow, Gregory Cohen, Brian Bell, Steven Angel
Scanbox Entertainment
1 hour 26 minutes
21/01/2008
Thank you for supporting DVD365.net when you order using the link(s) below. As an Amazon Associate we earn from qualifying purchases
Buy DVD
Information

A gloriously unabashed throwback of a comedy that gleefully hurls any pretensions to political correctness right out of the window from the get-go, Beer League does for softball what Caddyshack did for golf. A tour-de-force of bawdy, foul-mouthed, debauchery and irreverent humour that never lets up, Beer League, released by Scanbox Entertainment on 21st January 2008, is the kind of comedy that beats you so hard with the buffoonery bat that you can't do anything but submit to its will and join in the fun.

Resistance is futile. Drinking while you watch it is optional. Artie Lange (Old School; Boat Trip) stars as Artie DeVanzo, an unmotivated slob, jobless loser and serial boozer who still lives with his mother. During the very few hours a week when he's not in a bar trying to pick up drunken women or sitting at home listening to Molly Hatchet records, Artie plays in a softball team (proudly sponsored by Ed's Bar and Swill) that is better known for its drinking, puking and brawling abilities than its endeavours on the field. When a recent game with a team of super-slick arch rivals inevitably ends in fisticuffs, the two teams are given an ultimatum - whichever of the two comes lowest in the league at the end of the season will be kicked out for good.

The outlook for the Ed's Bar and Swill gang looks particularly bleak until Artie meets and falls in love with a local Jersey girl, Linda (Cara Buono), whose attentions motivate him to lead the team in a desperate bid to become winners for the first time in their lives. But first there's a little bit more drinking to be done and a stag night to organise for Artie's childhood buddy, Maz (Ralph Macchio), at whose wedding Artie has been given the unlikely job of Best Man.

And, quite frankly, any movie that features a sequence involving a prone Keisha firing ping-pong balls (from you-can-probably-guess-where!) at a baseball bat-wielding Lange while the Karate Kid himself is being molested on a pool table by a horde of whores just has to be seen.

DVD
For the first time in the cinematic history of Spider-Man, our friendly neighborhood hero's identity is revealed in Spider-Man: No Way Home, released on DVD, Blu-ray and 4K UHD 4th April 2022 from Sony Pictures Home ... END_OF_DOCUMENT_TOKEN_TO_BE_REPLACED
Top PicksView