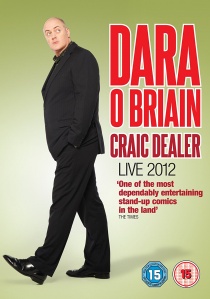 Recorded at the illustrious Edinburgh Playhouse in May 2012, Craic Dealer Live 2012 is Dara back doing what he does best. The king of audience interaction returns to the stage where he relishes exchanging ultra rapid fire quips with members of the audience, and delivers witty and daring anecdotes like no other stand up comedian.

The wonderfully erudite O Brain ranges through countless topics from the state of the economy, to married life and Tunnocks tea cakes. His random riffing with the front row and boundless passion for mirth making, coupled with his unique insight into the weird world of comedy and celebrity, once again sees Dara deliver a show of the highest quality, clearly establishing him as one of the UK's finest revered live comedians.

As well as his masterful stand-up work, O Briain's popularity has recently soared and he is now one of the most recognised hosts on our TV screens today. For the last seven years he has hosted the award winning BBC2 topical panel show Mock The Week, and more recently chaired The Apprentice BBC2 spin-off series, The Apprentice You're Fired! and also co-hosted BBC 2'sStargazing Live! alongside Professor Brian Cox.

Other recent TV shows include School Of Hard Sums (DAVE) and Three Men In A Boat with Griff Rhys Jones and Rory McGrath (BBC2). Back in May this year Dara also had the prestige honour of both presenting the 2012 BAFTA TV Awards on BBC ONE as well as being nominated himself in the best Entertainment Performance category, alongside Harry Hill, Alan Carr and Graham Norton.

HotDVDBDUHD
An action thriller unlike any other, a young getaway driver relies on the beat of his personal soundtrack to be the best in the game in Baby Driver, the newest explosion of genre-crossing excitement from writer-director Edgar Wright, released on 4K Ultra HD, Blu-ray and DVD ... END_OF_DOCUMENT_TOKEN_TO_BE_REPLACED
Top PicksView