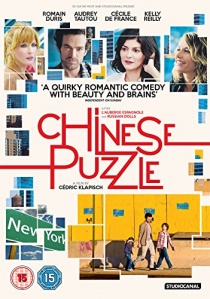 Now having reached the age of 40, Xavier's life is in a downward spiral. He breaks up with his wife Wendy (Reilly), who moves to New York, along with their two children, to live with her new partner John (Peter Hermann). Desperate to be near his kids, Xavier also heads for the city and stays in a friend's apartment in Chinatown.

When his visa runs out he weds Chinese-American Nancy (Li Jun Li) in order to become a permanent resident. Meanwhile, he fathers a child with lesbian friend Isabelle (Cécile De France) and reconnects with ex-girlfriend Martine (Tautou). Can he get his life back on track?

UHD
Ryan Reynolds stars in this action-packed comedy as a bank teller who discovers he is actually a background player in an open world video game in Free Guy, arriving on DVD, Blu-ray and 4K UHD 4th October 2021 from Walt Disney ... END_OF_DOCUMENT_TOKEN_TO_BE_REPLACED
Top PicksView