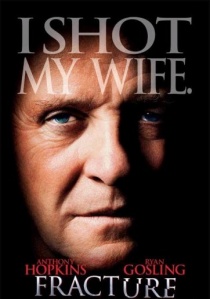 Get set for a fierce battle of intellect, strategy and wit as Entertainment In Video proudly announces the DVD release of nail-biting thriller, Fracture. Having grossed nearly £3.5 million at the UK box office, the film will be available to rent and buy on 13th August 2007.

Starring Academy Award®-winner Anthony Hopkins (The Silence of the Lambs, ll the King's Men) and Academy Award®-nominee Ryan Gosling (Half Nelson, The Notebook), Fracture follows a husband on trial for the attempted murder of his wife, in what is a seemingly open/shut case for an ambitious district attorney. However, there are surprises for both around every corner and, as a suspenseful game of cat-and-mouse is played out, so each must manipulate and outwit the other.

When Ted Crawford (Hopkins) discovers that his beautiful young wife, Jennifer (Davidtz), is having an affair, he plans her murder... the perfect murder.

Among the cops arriving at the crime scene is Detective Rob Nunally (Billy Burke), who is stunned to discover that the woman lying in a pool of blood is in fact his lover, a woman whose true identity he never knew. However, although Jennifer was shot at point blank range, Nunally realises that she isn't in fact dead.

Surprisingly, Crawford readily admits to shooting his wife and is immediately arrested and charged. For talented and fiercely ambitious young assistant district attorney Willy Beachum (Gosling), the whole thing adds up to an apparently straightforward case. However, nothing is as simple as it seems..

Will the lure of power and a love affair with a sexy attorney (Pike) interfere with Willy's fierce drive to win, or worse, quash his code of ethics? In a tense duel of intellect and strategy, Crawford and Willy both learn that a "fracture" can be found in every ostensibly perfect façade.