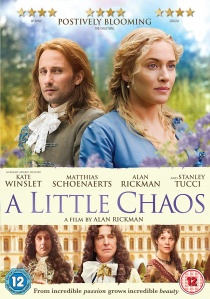 When brilliantly talented landscape gardener Madame Sabine De Barra (Kate Winslet - Labor Day, Revolutionary Road) finds herself an unlikely candidate for landscape architect of the stillto-be-completed Palace of Versailles, she is thrown into the bewildering world of the court of King Louis XIV (Alan Rickman - Lee Daniels' The Butler, Harry Potter and the Deathly Hallows). She has little time for the classical, ordered designs of her employer, the famous architect Le Nôtre (Matthias Schoenaerts - Far From The Madding Crowd, Suite Francaise), but as she works on her creation, she finds herself irresistibly drawn to him, while attempting to negotiate the perilous rivalries and intricate etiquette of the court.

BD
In The Little Things, released on DVD and Blu-ray 10th May 2021 from Warner Home Video, Kern County Deputy Sheriff Joe "Deke" Deacon is sent to Los Angeles for what should have been a quick evidence ... END_OF_DOCUMENT_TOKEN_TO_BE_REPLACED
Hot PicksView