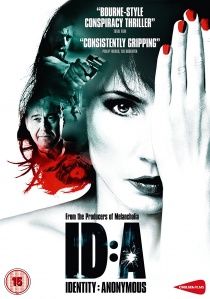 A young woman awakes to find herself lying in a river in the French countryside with a recently treated scar on her stomach and no recollection of who she is or how she got there. Beside her is a duffel bag containing two million Euros. She seeks refuge in a hotel in a small village nearby, where she adopts the name Aliena and discovers, by way of her accent, that she is possibly Danish. Disturbingly, she also becomes aware that several mysterious men are stalking her.

Heading to Denmark in search of her true identity, Aliena finds a clue when she overhears a recording and recognizes the voice of an opera singer named Just Ore. From this unexpected starting point she slowly begins to piece together the complicated details of her recent past and finds it wrought with tragedy and danger.

Following a long line of superlative and compelling amnesia-based thrillers such as Spellbound, the Bourne trilogy, Total Recall, Memento, Mulholland Drive and others, ID:A boasts a taut Hitchcockian plot that expertly teases the viewer with gradually revealed fragments of information before unveiling the final shocking truth about Aliena's life and who she really is.

HotUHD
After moving to a new town, two brothers discover that the area is a haven for vampires as the classic The Lost Boys is released on 4K UHD 20th September 2022 from Warner Home Video. END_OF_DOCUMENT_TOKEN_TO_BE_REPLACED
Top PicksView