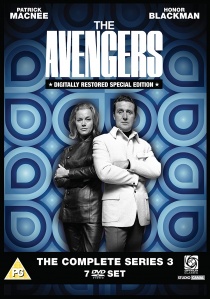 The seminal classic The Avengers was at the height of the Cathy Gale era when Series 3 was broadcast to UK audiences. Starring Patrick Macnee as John Steed and Honor Blackman as Dr Cathy Gale, the show's popularity was such that the producers bestowed a very healthy budget to ensure the series' success and maintain its position as one of the nation's favourite shows.

With the release of The Complete Series 3 on 15th February 2010 by Optimum Home Entertainment, and featuring the first full restoration of all episodes, we can relish the expanded wardrobes, lavish sets, top notch scriptwriting and stories that benefit from the combined input of writers, directors and actors.

Telling highly imaginative stories of secret agents in 1960s Britain, The Avengers is also an early example of the spy-fi genre combining as it does secret agent storylines with science fiction and fantasy elements.

Although the writers were not allowed to let characters go beyond first base, Series 3 did establish a level of sexual tension between the characters, which was progressive for 1962-1963. The series revealed that Gale lived in Steed's flat, and whilst the explanation was that it was a temporary arrangement whilst Gale looked for a new home, and that Steed slept in a hotel, the innuendo was there for all to see.

The Gale era also saw Steed transformed from a trenchcoat-wearing run of the mill agent into a stereotypical English gentleman in Savile Row suit, bowler hat and umbrella - a traditional English Gent, though his attire concealed all manner of tricks and gadgets. Gale, on the other hand, was clad in black leather with high-heeled "kinky boots", an outfit necessary for her high-kicking fighting style.

The longest running espionage series produced for English-language television, The Avengers eventually reached audiences in 120 countries, a record that still stands to this day. Now, with the release of The Complete Series 3 on 15th February 2010, you can watch time this timeless classic time and time again.

BD
A stellar cast sizzles in Heat, a taut psychological drama about an obsessive detective and a brilliant thief whose fates are linked in the aftermath of a high-stakes securities heist, released on 4K UHD 8th August 2022 from ... END_OF_DOCUMENT_TOKEN_TO_BE_REPLACED
Top PicksView