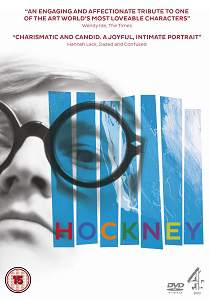 For the first time, David Hockney has given unprecedented access to his personal archive of photographs and films, resulting in a frank and unparalleled visual diary of his long life. Hockney, the definitive exploration of one of the most important artists of his generation, is available on DVD from 15th December 2014, courtesy of Channel 4 DVD.

Acclaimed filmmaker Randall Wright offers a unique view of this unconventional artist who is now reaching new peaks of popularity worldwide. As charismatic as ever, at 77 years old he is still working in the studio seven days a week.

An important contributor to the Pop Art movement of the 1960s, Hockney is considered one of the most influential British artists of the 20th century. He is perhaps most famous for his series of paintings of swimming pools, including his 1967 work A Bigger Splash.

The film chronicles Hockney's vast career, from his early life in working-class Bradford, where his love for pictures was developed through his admiration for cinema, to his relocation to Hollywood where his life long struggle to escape labels ('queer', 'working class', 'figurative artist') was fully realised.

Paradoxically, this escape to live the American Dream did not break the ties to the childhood that formed him. We see how his upbringing and life experiences give him the willpower to survive relationship problems, and later the AIDS epidemic, but also allow him to create some of the most renowned works of the past century.

DVD
Catherine finally takes the Russian throne for her own - but if she thought coup-ing her husband was difficult, it's nothing compared to the realities of liberating a country that doesn't want to be in The Great: Season Two, ... END_OF_DOCUMENT_TOKEN_TO_BE_REPLACED
Top PicksView