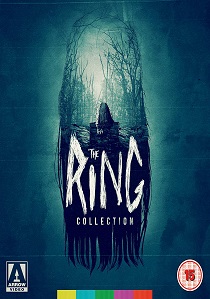 NewsComedyHorrorFamilyBoxsetArrow
News Article Go back to homepage
Gathered together in glorious high definition and supplemented by a wealth of archival and newly created bonus materials, released 18th March 2019 on Blu-ray, Arrow Video is proud to present the genre-defining trilogy Ring, the film that started it all.
Nanako Matsushima, Miki Nakatani, Yûko Takeuchi
Hideo Nakata, Joji Iida, Norio Tsuruta
Arrow Video
6 hours 26 minutes
18/03/2019
#TheRingCollection
Thank you for supporting DVD365.net when you order using the link(s) below. As an Amazon Associate we earn from qualifying purchases
Buy BD
Information

In 1998, director Hideo Nakata (Dark Water) unleashed a chilling tale of technological terror on unsuspecting audiences, which redefined the horror genre, launched the J-horror boom in the West and introducing a generation of moviegoers to a creepy, dark-haired girl called Sadako. The film's success spawned a slew of remakes, reimaginations and imitators, but none could quite boast the power of Nakata's original masterpiece, which melded traditional Japanese folklore with contemporary anxieties about the spread of technology.

A group of teenage friends are found dead, their bodies grotesquely contorted, their faces twisted in terror. Reiko (Nanako Matsushima, When Marnie Was There), a journalist and the aunt of one of the victims, sets out to investigate the shocking phenomenon, and in the process uncovers a creepy urban legend about a supposedly cursed videotape, the contents of which causes anyone who views it to die within a week unless they can persuade someone else to watch it, and, in so doing, pass on the curse...

Released 18th March 2019 on Blu-ray, Arrow Video is proud to present the genre-defining trilogy Ring, the film that started it all, plus Hideo Nakata's chilling sequel, Ring 2, and the haunting origin story, Ring 0 as well as the lost original sequel, George Iida's Spiral, gathered together in glorious high definition and supplemented by a wealth of archival and newly created bonus materials.

BD
The end of the line is only the beginning in a wild, non-stop thrill ride through modern-day Japan as Bullet Train is released on DVD, Blu-ray and 4K UHD 24th October 2022 from Sony Pictures Home Entertainment END_OF_DOCUMENT_TOKEN_TO_BE_REPLACED
Top PicksView