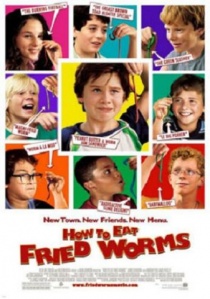 Dig in to the delicious family comedy How to Eat Fried Worms as it arrives on rental DVD on 26th February 2007 and retail DVD on 12th March 2007 courtesy of Entertainment In Video. A classic coming-of-age story, this hilarious tale follows new-kid-in-school Billy as he is forced to decide just how much he is willing to stomach in his quest for popularity.

Based on the best-selling, award-winning book by Thomas Rockwell, How to Eat Fried Worms is written for the screen and directed by Bob Dolman (The Banger Sisters) and stars Tom Cavanagh (Scrubs), Kimberly Williams-Paisley (Father of the Bride), Luke Benward (Because of Winn-Dixie) and Hallie Kate Eisenberg (The Insider).

When 11-year-old Billy (Luke Benward) arrives at a new school, he immediately falls foul of notorious bully Joe (Adam Hicks). In order to save face and earn the respect of his new classmates, Billy agrees to take Joe's bet that he can't eat 10 worms in one day without throwing up.

Unfortunately there is just one slight problem - Billy has a horrible habit of vomiting at the slightest provocation. As the pressure mounts, Billy must summon heroic strength to keep his five-year-old brother from blabbing, his weak stomach from betraying him and his big mouth from getting him into more trouble than he's already in.