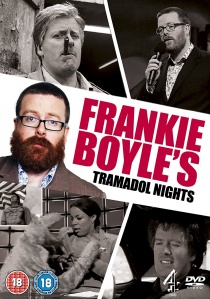 Join the razor-sharp Glaswegian comic, Frankie Boyle in his first ever solo series, Frankie Boyle's Tramadol Nights, out to own on DVD from 4DVD on 21st November 2011.

Frankie Boyle's Tramadol Nights features outrageous and often controversial stand-up recorded in front of a live studio audience who frequently find themselves on the receiving end of Frankie's legendary put downs. Mixed in with the stand-up sections of the show there are a range of hilarious sketches in which Frankie picks apart all aspects of modern life.

Scabrous, sharp and scathing, Tramadol Nights is no-holds-barred comedy in which everything is given a uniquely Frankie spin. One of the most talked about shows of the year, this six-part series comes to DVD for the first time. The side-splitting and shocking sketches include the hilarious Iranian version of Loose Women, George Michael's lewd Highway Code and a new soap opera which is so politically correct that actors' faces are blanked out to avoid anyone taking offence. And let's not forget the spoof of Sesame Street featuring a sex-obsessed 'Pussy Monster' or the sketch that re-imagines 1980s TV show Knight Rider as the hallucinations of a junkie! Also, for the first time watch unseen sketches that were unable to be broadcast.

Frankie Boyle is a unique comedian who has the ability to entertain and offend in equal measure. With its brutally elegant one-liners and stinging ad-libs, Tramadol Nights will have you wondering just how he gets away with it!

As a former panelist on Mock the Week and a regular guest on l popular panel shows including Have I Got News For You, 8 Out of 10 Cats and Would I Lie To You?, Boyle is well known for his triumphantly close-to-the bone sense of humour. Tramadol Nights demonstrates Frankie at the top of his game, satirising everything we love and loathe about British culture and delivering unadulterated comedy that is certainly not for the fainthearted!

3D-BD
The surviving members of the resistance face the First Order once again, and the legendary conflict between the Jedi and the Sith reaches its peak as Star Wars: The Rise of Skywalker is released on ... END_OF_DOCUMENT_TOKEN_TO_BE_REPLACED
Top PicksView