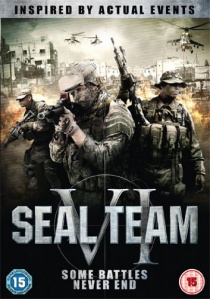 Seal Team VI - Journey Into Darkness, a gripping drama inspired by the heroic and highly secretive missions of the US Navy's SEAL Special Forces Team, is being released on retail DVD by Scanbox Entertainment on 25th October 2010. Not to be confused with a sequel, SEAL Team VI is the most elite of the 12 US Navy & Special Forces SEAL Teams.

It is the heart wrenching story of the team's so-called black ops incursion into Iraq four days prior to the start of Operation Desert Storm and the harrowing consequences it ultimately faces when their mission is suddenly compromised.

Having been handpicked by one man, Master Chief Devon 'Mack' Mackefy, the squad specialises in counter-terrorism operations and is ready at any time to travel the world to respond to terrorist threats from air, land or sea. Mack and his team are highly respected for their ability to finish the most complex tasks irrespective of the circumstances and while their reputation is uncompromised their activities are shrouded in both controversy and secrecy.

When the team is called up by the US government to undertake an operation inside Iraq, they are one man short and seriously strained from a previous mission. Furthermore, their newest recruit Davis is untested in the field and these factors threaten the success of the operation as well as the team's survival.

They find themselves surrounded by the enemy in every direction as they try to identify and mark aerial targets, avoid capture and stay alive for four days. On top of all these problems, the team's fearless leader is distracted because he is privately grieving over the recent loss of his 12-year-old son.

His wife Cassandra knew what she was getting herself into by marrying Mack but the unexpected and immediate deployment of the team when she needed him most proves too much for her to handle. Her fear of losing what's left of her family is outweighed by the fact that Mack has no choice in the matter but he is forced to deal with his own demons during the mission when he has to decide between taking the life of an innocent boy or risking the lives of his men.

However, ultimately Mack, Davis and the rest of the team know they have to opt for honour, brotherhood and courage as they risk their lives in the name of freedom.