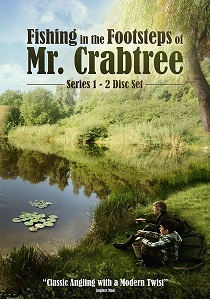 Fishing in the Footsteps of Mr Crabtree

News
News Article Go back to homepage
Join John Bailey and his troop of protégées as they go Fishing in the Footsteps of Mr Crabtree, released on DVD by 4Digital Media on 24th March 2014.
John Bailey
4Digital Media
Unknown
24/03/2014
#FishingInTheFootstepsOfMrCrabtree
Buy DVD
Information

If you love the heritage and history of fishing you'll already know all about Mr. Crabtree. It's likely that you refer to 'Crabtree swims', that you know what a 'gentle' is and that the idea of fishing in a tweed three-piece-suit doesn't really seem that odd to you.

If you're new to the Crabtree Crusade, then it's high time you joined John Bailey and his troop of protégées as they go 'Fishing in the Footsteps of Mr. Crabtree', combining old and new in perfect harmony to catch their quarry.

Experience with them the highs and lows of our great sport, taking in the misty dawns and the glorious sunsets, experiencing the thrill of the rod bend, the scream of the reels, and breathless anticipation as we wait to see what's going to be on the end of that line.

Fishing in the Footsteps of Mr Crabtree is released on DVD by 4Digital Media on 24th March 2014.

DVD
In Disney's Mulan, released on DVD, Blu-ray and 4K UHD 10th November 2020, a fearless young woman risks everything out of love for her family and her country to become one of the greatest warriors ... END_OF_DOCUMENT_TOKEN_TO_BE_REPLACED
Hot PicksView