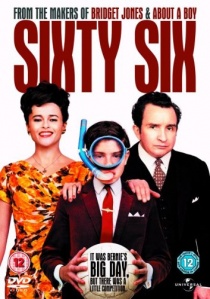 Based on the real life experience of director Paul Weiland, Sixty Six is an honest and beautiful coming-of-age comedy which is available on DVD and to download to own from 5th March 2007, courtesy of Universal Pictures (UK).

England, the summer of '66 and the country is about to be consumed by World Cup Fever. For 12 year-old Bernie (Gregg Sulkin) though, the biggest day of his life is looming: his Bar Mitzvah, and the day he becomes a man. However, with Bernie's family increasingly distracted by the threat of losing their business and their wayward older son, the scale of Bernie's Bar Mitzvah diminishes daily. Worst of all the Cup Final is scheduled to take place on the same day and when England makes it through the qualifying rounds, Bernie's longed-for Bar Mitzvah looks set to be a complete disaster.

The film tells two stories - Bernie planning his elaborate Bar Mitzvah, the only person in England hoping that the England team will fail to make the Final; and Manny (Eddie Marsan), Bernie's anxious and needy Dad, whose grocery business, a business he shares with his more charismatic younger brother, Jimmy (Peter Serafinowicz), comes under threat from a new and giant supermarket opening opposite his store.

Central to the story, and what makes it as touching as it is funny, lies the relationship between father and son. Manny's anxiety - a result of an obsessive-compulsive disorder - gets in the way of him being the Dad Bernie wants him to be. His mother, Esther (Helena Bonham Carter), is so caught up looking after her needy husband, and worrying about her older son Alvie's (Ben Newton) unruly behaviour, Esther barely has time to notice her better behaved younger son. Bernie believes his Bar Mitzvah is about to change all this. He'll no longer be the kid everyone ignores. Unfortunately for Bernie, things don't quite go according to his (extremely detailed) plan.

From the makers of About a Boy and Bridget Jones's Diary, Sixty Six, a sweet, loveable comedy which shows that life isn't perfect, is a must own film available on DVD and to download to own from 5th March 2007, courtesy of Universal Pictures.