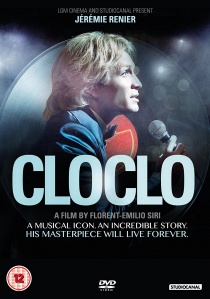 Directed by Florent-Emilio Siri and starring Jérémie Renier, Benoit Magimel and Monica Scattini, Cloclo is available to own on DVD on 3rd September 2012 from StudioCanal.

While England was rocked by The Beatles, France was going crazy for Claude François, aka Cloclo. Directed by Florent-Emilio Siri (Hostage) and written by Julien Rappeneau (Burma Conspiracy, 36) Cloclo is, in the vein of La Vie en Rose, a powerful biopic of one of the most famous French singers.

Starring Jérémie Renier (In Bruges, Potiche) Cloclo draws the portrait of a complex character who became a legend in his country and reached international fame with his famous song Comme D'Habitude adapted as My Way by Frank Sinatra.

The destiny of Claude François, who died at the age of 39, continues to fascinate fans more than 30 years later. He was a much-loved star and shrewd businessman, great showman and marketing magician, hit machine and magazine publisher, but also family man and ladies' man.

Cloclo is the fascinating story of a man whose ambition drove him straight to the top, but ultimately led him to a tragic end.