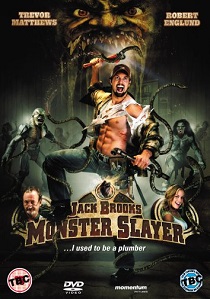 Jack Brooks: Monster Slayer, the hugely entertaining, B-movie comedy horror, delivering a rousing round of monster mayhem, will be released on DVD on the 29th September 2008 from Momentum Pictures.

After witnessing the brutal murder of his family, Jack Brooks (Trevor Matthews) is left with an unquenchable fury and emotions he is constantly trying to keep under control. Years later, working as a local plumber and struggling to keep any relationship together, Jack's life is rapidly heading towards a downward spiral. One night, while fixing his college professor's (Robert Englund) water system, an ancient demon is awakened and the subsequent evil force is unleashed. As Professor Crowley becomes possessed and transforms into a creature of legends, Jack finally realises the true reasons for his inner rage and how he can no longer run from the past...

Jack Brooks: Monster Slayer is Jon Knautz's directorial debut and also stars Rachel Skarsten, Daniel Kash and James A Woods. The DVD boasts a host of extras, including the short film Teen Massacre and extensive behind-the-scenes Making of the monsters and never before seen Deleted scenes.

HotDVDBD
From the producers of Nobody and John Wick comes a bare-knuckle, coal-dark holiday action-comedy that says you should always bet on red as Violent Night sledges in on DVD and Blu-ray 6th March 2023 from Warner Home Video. END_OF_DOCUMENT_TOKEN_TO_BE_REPLACED
Top PicksView