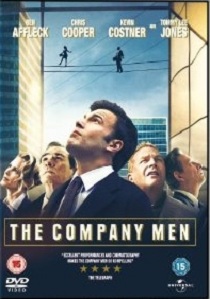 Starring Ben Affleck and Tommy Lee Jones, celebrate the highs and lows of living the American dream this Independence Day when The Company Men is released by Universal Pictures (UK) on Blu-ray and DVD from 1st August 2011.

When you fall from grace, you often fall hard. Academy Award® winners Ben Affleck, Tommy Lee Jones, Chris Cooper and Kevin Costner star in this compelling film which captures the heart breaking and emotional realities of corporate downsizing during an economic recession.

Bobby Walker (Affleck - Pearl Harbour) faces the cut-throat world of layoffs and redundancies as an executive in the midst of the 2009 economic collapse. Bobby epitomises the typical city boy at the top of his game, complete with big house, fast car and designer suit. In an instant, the economic climate changes, and with it, Bobby's whole life and that of his family's are turned upside down.

Brutal cuts are made across the industry and thousands of employees take the hit, including Bobby who is left unemployed along with colleagues Gene (Tommy Lee Jones - Men in Black) and Phil (Chris Cooper - American Beauty). Each deals with this blow to the economy, and their own personal lives, in various different ways. Their speedy regression from the white collar lifestyle affects not only their pockets, but also their families, their relationships and their spirits.

Moving performances from the cast give us an insight into each character's vulnerability, Bobby in particular becomes more human as he goes from having everything, or so he thinks, to seemingly having nothing. Reminiscent of recent times, The Company Men reminds us of the crippling effect that a bruised economy can have on a community.

The Company Men is a heartfelt depiction of a time that will resonate with today's audience. The film reassures us that it's never too late to start over, and that true happiness is not something that can be bought.

UHD
In Yesterday, released on DVD, Blu-ray and 4K UHD 4th November 2019 from Universal Pictures (UK), a struggling musician realises he's the only person on Earth who can remember The Beatles after waking ... END_OF_DOCUMENT_TOKEN_TO_BE_REPLACED
Hot PicksView

Fans, aficionados and collectors are in for a treat as horror maestro George A. Romero's long-awaited, highly anticipated Dawn of the Dead, finally gets the home entertainment release it deserves from Second Sight Films on 16th November 2020.