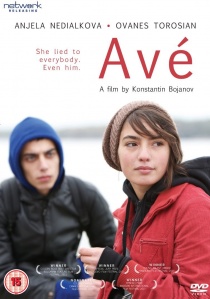 NewsScience FictionDramaAdventure
News Article Go back to homepage
Konstantin Bojanov directs Avé, released on DVD by Network DVD on 14th May 2012, the startling tale of two teenagers on a roadtrip across Bulgaria. One is a compulsive liar, the other is haunted by the truth.
Nikola Dodov, Bruno S., Svetlana Yancheva, Martin Brambach, Ovanes Torosian, Anjela Nedyalkova
Konstantin Bojanov
Methodius Petrikov, Geoffroy Grison, Dimitar Gochev, Konstantin Bojanov
Network DVD
1 hour 26 minutes
14/05/2012
Thank you for supporting DVD365.net when you order using the link(s) below. As an Amazon Associate we earn from qualifying purchases
Buy DVD
Information

Recalling classic road movies such as The Passenger, Five Easy Pieces and La Vie Revée des Anges and inspired by haunting real-life events and encounters, Konstantin Bojanov's debut feature is as spontaneous and freewheeling as the characters' adventures. Portraying the unfolding of two personal dramas with levity and humour, this remarkable, triple-award winning film explores exceptional moments when time feels suspended and one's responsibility is only to the beat of one's own heart.

While hitchhiking from Sofia to Ruse, Kamen, an alienated art student, meets Avé, a 17-year-old runaway. With each ride they hitch, Avé invents new identities for both of them, her compulsive lies dragging Kamen deeper and deeper into trouble, drawing him into a confusing adventure and ultimately forcing them to confront both death and love in a cathartic and life-changing experience.