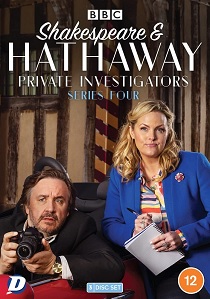 The fourth Series of the Hit BBC Show Shakespeare and Hathaway - Private Investigators is released on DVD and Blu-ray 21st March 2022 from Dazzler Media.

Starring Jo Joyner & Mark Benton and combining corpses, comedy and cracking mysteries, this quirky crime drama has won the hearts of over 200 countries.

Now that Lu has passed her private investigator exams and Frank's tidied himself up a bit, there's no stopping them. But murder, kidnap, blackmail and infidelity still abound in the pretty tourist town of Stratford-upon-Avon. An ageing heavy metal star with a pact with the devil. A Shakespeare museum full of deadly secrets. A King Lear story set in a carpet warehouse.

Welcome to the birthplace of the Bard, where low-life criminals get caught up in deliciously high drama.

UHD
From the Wachowski brothers and Joel Silver, the masterminds behind The Matrix trilogy, comes another intriguing, action-packed fantasy-thriller in V for Vendetta, released on 4K UHD 2nd November 2020 from Warner Home Video. END_OF_DOCUMENT_TOKEN_TO_BE_REPLACED
Top PicksView