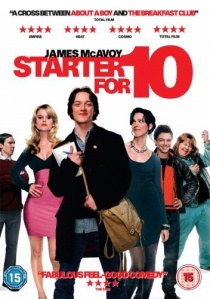 Icon Home Entertainment announces the DVD release of the nostalgic and charming Starter For 10 on the 16th April 2007. Starring an outstanding British cast including the storming James McAvoy (The Last King of Scotland, Shameless), Alice Eve (The Rotters Club), Rebecca Hall (The Prestige), Charles Dance, Catherine Tate and The League of Gentlemen's Mark Gatiss Starter For 10 is a bittersweet romantic comedy about loyalty, class, falling in love and the difference between knowledge and wisdom.

Starter For 10 is based on David Nicholl's best selling novel and features a brilliant and nostalgic soundtrack filled with classic 1980s tunes by The Cure, The Smiths, Kate Bush, Echo and the Bunnymen, The Psychedelic Furs and more.

It's 1985; Thatcher's in power, The Cure are In Between Days and Marty McFly's trying to get Back To the Future. James McAvoy is Brian Jackson, a wide-eyed working class kid whose exhaustive grasp of general knowledge leaves him wanting when it comes to women. On his way to achieving his long held ambition to appear on University Challenge, he falls in love with fellow student and team-mate Alice (Alice Eve); has his conscience pricked (as well as other things) by rights activist Rebecca (Rebecca Hall); all whilst trying not to become the student w@*£er that his hometown mates think he'll turn into! 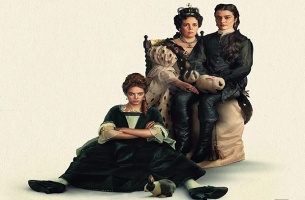 HotDVDBD
Starring Oscar® Winner Oliva Colman, in The Favourite, released on DVD and Blu-ray 13th May 2019 from Twentieth Century Fox Home Entertainment, the relationship between Queen Anne and her close friend, Lady Sarah, is threatened by a new servant who ... END_OF_DOCUMENT_TOKEN_TO_BE_REPLACED
Comments
UHD Releases News Pick