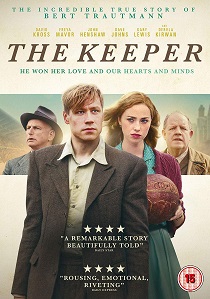 The Keeper, released on DVD and Blu-ray 9th September 2019 from Spirit Entertainment, tells the incredible true story of Bert Trautmann (David Kross), a German soldier and prisoner of war who, against a backdrop of British post-war protest and prejudice, secures the position of Goalkeeper at Manchester City, and in doing so becomes a footballing icon.

Struggling for acceptance by those who dismiss him as the enemy, Bert's love for Margaret (Freya Mavor), an Englishwoman, carries him through and he wins over even his harshest opponents by winning the 1956 FA Cup Final, playing on with a broken neck to secure victory. But fate will soon twist the knife for Bert and Margaret, when their love and loyalty to each other is put to the ultimate test.

Related Articles
I, Daniel Blake, 23 Walks, Blithe Spirit
Being Human: Series 3, Bonded by Blood, Being Human: Series 1, Shank, Double Date, Time
Not Another Happy Ending, Sunshine on Leith, Dead In A Week (Or Your Money Back)
The Angels' Share, Cilla, The Angels' Share
Harry Potter and the Deathly Hallows: Part 1, The War of the Worlds
Age of Uprising: The Legend of Michael Kohlhaas
Comments
UHD Releases News Pick