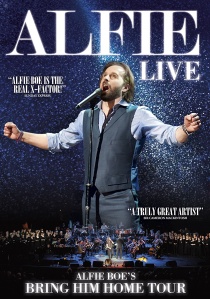 NewsComedyMusic
News Article Go back to homepage
British operatic sensation Alfie Boe, comes to DVD and Blu-Ray Double Play with an outstanding live stage performance as Alfie Boe - The Bring Him Home Tour arrives on DVD from 12th March 2012, courtesy of Universal Pictures (UK) Ltd - a must have for all Alfie fans and the perfect gift for Mother's Day.
Universal Pictures (UK)
Unknown
12/03/2012
As an Amazon Associate we earn from qualifying purchases
Buy DVD
Buy BD
Information

British operatic sensation Alfie Boe, comes to DVD and Blu-Ray Double Play with an outstanding live stage performance from the The Bring Him Home Tour on 12th March 2012, courtesy of Universal Pictures (UK) Ltd - a must have for all Alfie fans and the perfect gift for Mother's Day.

Perhaps best known recently for his role as Jean Valjean in the 25th Anniversary stage show of Les Misérables, Alfie Boe's star status continues to soar. With both his latest albums reaching the UK Top 10, The Bring Him Home Tour on DVD and Blu-Ray Double Play provides a unique opportunity for true music fans to see this mesmerising performance direct from Alfie's natural home - the stage.

Recorded live during his sell-out 2011/2012 tour, Bring Him Home, showcases Alfie's magnificent stage presence as he shares with the audience a selection of uniquely inspired renditions from some of the best-loved musicals of all time including Blood Brothers, West Side Story and Les Misérables - with Alfie performing his own emotive interpretation of Bring Him Home accompanied by Claude Michel Schonberg, one of the original writers of the score. Alfie is also joined on stage by some of his own celebrity friends including much-loved comedian and Little Britain star Matt Lucas, whose comedy duet of The Impossible Dream (Les Misérables) is a highlight of the show, whilst Spice Girls star Melanie C and McFly's Tom Fletcher also join him to perform a selection of rousing tunes. With a set list that includes classic tracks from artists such as Marvin Gaye, The Beatles and Tom Jones as part of a stirring James Bond medley, there is a song on the DVD to suit every taste.

The 2011/2 Bring Him Home Tour is a sell-out success with more than 50,000 tickets sold across 23 dates. Now viewers can enjoy the full experience from the comfort of their own home, or share his talented voice with loved ones this Mother's Day, as Alfie Boe - The Bring Him Home Tour arrives on DVD from 12th March 2012.

Alfie Boe's current Top 10 album 'Alfie' presents a collection of the most beautiful and timeless songs, sung just the way you want to hear them. His delivery of such romantic classics as the forever popular 'When I Fall In Love', Leonard Bernstein's impassioned 'Maria' from West Side Story and Ewan MacColl's heartfelt folk song 'The First Time Ever I Saw Your Face' bring a lump to your throat. And Alfie continues to surprise us with his unlikely, but perfect, pairings being joined by one of his heroes, rock legend Robert Plant for an extremely moving version of Tim Buckley's 'Song To The Siren' on the album.

'Alfie' is made up of songs of genuine power and quality, a status that is only enhanced when interpreted by one of the world's great voices. The magic of the musical has never sounded more enchanting.

3D-BD
The surviving members of the resistance face the First Order once again, and the legendary conflict between the Jedi and the Sith reaches its peak as Star Wars: The Rise of Skywalker is released on ... END_OF_DOCUMENT_TOKEN_TO_BE_REPLACED
Top PicksView