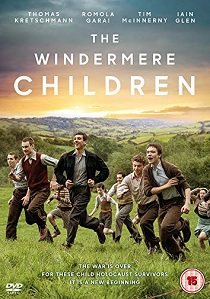 The War is over. For these child Holocaust survivors it is a new beginning. Starring Thomas Kretschmann, Romola Garai, Tim McInnerny & Iain Glen, the powerful BBC film The Windermere Children is released on DVD and Blu-ray 3rd February 2020 from Spirit Entertainment.

A powerful and uplifting drama based on an extraordinary, untold true story of hope in the aftermath of the Holocaust, brought to us by award winning producers Wall to Wall (The Girl, The Scandalous Lady) and written by BAFTA nominated screenwriter Simon Block (The Eichmann Show, Home Fires).

One summer's night in 1945, 300 children are in transit from Prague to the Lake District, a remote and picturesque corner of the English countryside. They are child survivors of the Nazi Holocaust that has all but wiped out Europe's Jews - and for these particular children, their entire families too. They are some of the 1000 children the British government has granted refuge to, giving them a place where they can rehabilitate and grow strong after the devastation of the war.

They carry only the clothes they wear and a few meagre possessions, along with the physical and psychological scars of all they have suffered. They do not know what awaits them in Britain and naturally they are fearful: they don't speak English, and having spent many years living in death camps, have missed out on a proper education. But the children are also excited, for the war is over, and there is always hope that the future will be kinder to them than the past.

This moving and ultimately redemptive story follows the children and the remarkable team who were responsible for helping these children rebuild their lives as they forge friendships that will become a lifeline to a better future.

DVD
From the acclaimed director of fan-favourites such as Baby Driver, Shaun of the Dead and The World's End comes the tribute to 1960s London in Last Night In Soho, available to own on DVD, Blu-ray and 4K UHD 31st January 2022 ... END_OF_DOCUMENT_TOKEN_TO_BE_REPLACED
Top PicksView