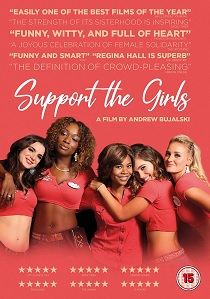 NewsComedyRegina Hall
News Article Go back to homepage
The general manager at a highway-side 'sports bar with curves' has her incurable optimism and faith, in her girls, her customers, and herself, tested over the course of a long, strange day as Support The Girls arrives DVD 21st October 2019 from Bulldog.
Regina Hall, Haley Lu Richardson, Dylan Gelula, Brooklyn Decker, James Le Gros, Lea DeLaria, Shayne McHayle
Andrew Bujalski
Sam Slater
Bulldog
1 hour 27 minutes
21/10/2019
#SupportTheGirls
Thank you for supporting DVD365.net when you order using the link(s) below. As an Amazon Associate we earn from qualifying purchases
Buy DVD
Information

Lisa Conroy (Regina Hall) is the last person you'd expect to find in a highway-side 'sports bar with curves', but as general manager at Double Whammies, she's come to love the place and its customers. An incurable den mother, she nurtures and protects her girls fiercely - but over the course of one trying day, her optimism is battered from evey direction. Double Whammies sells a big, weird American fantasy, but what happens when reality pokes a bunch of holes in it?

Support The Girls received rave reviews from critics and audiences around the globe and huge praise for Regina Hall's compelling performance which won the New York Film Critics Circle Award for Best Actress, making her the first African-American to win the award. At the top of many critics Best Films of the Year lists, Support The Girls was also named by former President Barack Obama as one of his favourite films of 2018.

Writer/director Andrew Bujalski was called one of the most influential films of the '00s by New York Times critic A.O. Scott for his first feature film Funny Ha Ha. He has also written and directed the films Mutual Appreciation, Beeswax, Computer Chess and Results which have played festivals and won awards worldwide.

Regina Hall began her acting career in the late 1990's while simultaneously earning a master's degree from New York University. With numerous film and television credits to her name, Regina Hall has emerged as one of Hollywood's most sought after comedic actresses. Her features include Shaft, alongside Samuel L. Jackson, a remake of the 1970's film of the same title, Tina Gordon's comedy Little and the new 80s-set Showtime series 'Black Monday' alongside Don Cheadle. Previously Regina lit up the big screen in the comedy blockbuster Girls Trip alongside Jada Pinkett Smith, Queen Latifah and Tiffany Haddish. Her other film credits include The Hate U Give, Naked, When the Bough Breaks, Barbershop 3, The Best Man Holiday, Think Like a Man Too, About Last Night and Scary Movie as well as its three sequels.

Related Articles
Girls Trip, Think Like A Man Too, About Last Night, Think Like A Man, Scary Movie, Scary Movie 2, The Hate U Give, Little
Certain Women, Mildred Pierce
Split, The Edge of Seventeen, The Last Survivors, Five Feet Apart
Results
What To Expect When You're Expecting, Battleship, Just Go With It
Comments
DVD Releases News Pick