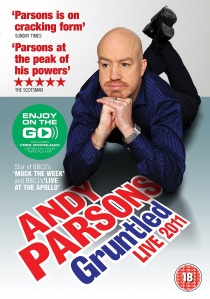 Andy is Gruntled; from finding some underpants in a jar of mayonnaise to poorly-attended Edinburgh debuts, awful gigs, medical tales and relevant issues, such as the matter of offence in comedy, he found that the more of the country you see, the more chance your mayonnaise will contain underpants! So this time Andy will be holding nothing back. Everything will be all hanging out. It will be nothing but the whole truth, slightly embellished. This is an intelligent, thought provoking show by one of our most astute comedians.

Andy has enjoyed huge success as a writer and performer on television and radio as well as on stage. He was a main writer on the original Spitting Image (ITV), is a regular on Mock the Week (BBC2) and has made appearances on amongst others, QI (BBC2), The Politics Show (BBC1), Newsnight (BBC2), Saturday Live (ITV) and Live at the Apollo (BBC1). Andy was also in the stellar line up for Channel 4's Comedy Gala At The O2. In 2009 he also released his debut stand-up DVD Britain's Got Idiots through Universal Pictures (UK) which aired on BBC2 in 2010.

UHD
From the Wachowski brothers and Joel Silver, the masterminds behind The Matrix trilogy, comes another intriguing, action-packed fantasy-thriller in V for Vendetta, released on 4K UHD 2nd November 2020 from Warner Home Video. END_OF_DOCUMENT_TOKEN_TO_BE_REPLACED
Top PicksView