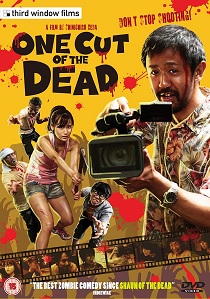 The most successful independent film in Japanese cinema history! Opening on just 2 screens, One Cut Of The Dead grossed more than $30 million and spent more time in the Box Office Top 10 than any other film!

A cast of relative unknowns, a brilliantly disguised low budget and an epic, 37-minute opening single take makes Shinichiro Ueda's feature debut a bright, breezy and laugh-out-loud hilarious zombie comedy. A film crew is shooting a zombie horror flick in an abandoned water filtration plant, allegedly used for human experiments by the military. Just as the director browbeats his actors and demands more special effects blood, a real zombie apocalypse erupts, much to his auteur delight.

One Cut Of The Dead is released on DVD and Blu-ray 21st January 2019 from Third Window Films.