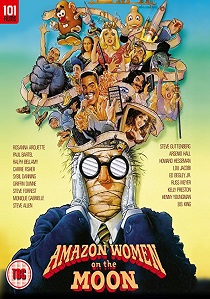 Amazon Women on the Moon is a 1987 American satirical comedy film that parodies the experience of watching low-budget movies on late-night television. The film, featuring a large ensemble cast, was written by Michael Barrie and Jim Mulholland, and takes the form of a compilation of 21 comedy skits directed by five different directors: Joe Dante, Carl Gottlieb, Peter Horton, John Landis, and Robert K. Weiss.

The title Amazon Women on the Moon refers to the central film-within-a-film, a spoof of science-fiction movies from the 1950s that borrows heavily from Queen of Outer Space (1958) starring Zsa Zsa Gabor, itself a movie that recycles elements of earlier science-fiction works such as Cat-Women of the Moon (1953), Fire Maidens from Outer Space (1955), and Forbidden Planet (1956).

For the first time on Blu-Ray anywhere, Amazon Women on the Moon is released on dual-format DVD and Blu-ray 2nd April 2018 from 101 Films. 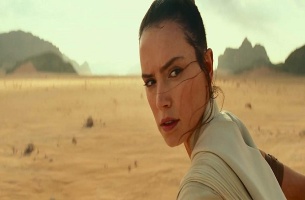 HotDVDBD3D-BDUHD
The surviving members of the resistance face the First Order once again, and the legendary conflict between the Jedi and the Sith reaches its peak as Star Wars: The Rise of Skywalker is released on DVD, Blu-ray, 3D Blu-ray and 4K UHD 20th April 2020 from Walt ... END_OF_DOCUMENT_TOKEN_TO_BE_REPLACED
Comments
BD Releases News Pick