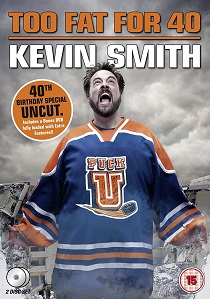 NewsComedy
News Article Go back to homepage
Following the huge success of fan favourites An Evening With Kevin Smith and An Evening With Kevin Smith 2: Evening Harder, the acclaimed filmmaker, writer, actor and raconteur releases his first new stand-up DVD in five years in the form of Too Fat For 40 released on DVD by Mediumrare Entertainment on 23rd January 2012.
Kevin Smith
Zak Knutson, Joey Figueroa
Zak Knutson, Albie Hecht, Joey Figueroa, Branden Cobb
Mediumrare Entertainment
Unknown
23/01/2012
Thank you for supporting DVD365.net when you order using the link(s) below. As an Amazon Associate we earn from qualifying purchases
Buy DVD
Information

Filmed on the evening of Kevin Smith's 40th birthday before a crowd of rabid fans at the Count Basie Theatre in his home town on Red Bank, New Jersey, this comedy special comes to DVD on 23rd January 2012 (coinciding with the release of Red State on DVD and Blu-ray) as a two-disc edition featuring the full, uncut and unexpurgated three-and-a-half-hour version of Smith's performance and including a Bonus DVD loaded with extra features including additional encore Q&A footage and a look behind the scenes.

Taking its title from the much-publicized brouhaha (which is hilariously discussed at length during the show) in which Southwest Airlines declared Smith "too fat to fly", Too Fat For 40 puts the spotlight firmly on Kevin Smith's brilliantly self-deprecating humour as he pokes fun at his everyday life through anecdotes and yarns all prompted by a one-question audience Q&A.

Absolutely nothing is off limits as Smith discusses very personal and very funny aspects of his private and public life including sex, the problems of being overweight, working with his hero, the late George Carlin, getting stoned with Seth Rogen, being arrested by the Canadian border guards for smuggling, being suspected by the LAPD of child kidnapping and the difficulties of working with a Hollywood superstar of Bruce Willis' stature - a situation exacerbated by the fact that the Hollywood superstar in question suspects you don't really know what you are doing. And, naturally, this being Kevin Smith, fellow actor-director and good friend Ben Affleck frequently finds himself in the firing line of Smith's comedy pot shots.

Part concert, part Q&A and totally funny, Too Fat For 40 is essential viewing for Kevin Smith fans and anybody with a love of filmmaking and stand-up comedy.

HotDVDBDUHD
Released on DVD, Blu-ray and 4K UHD 16th September 2019 from Lionsgate Home Entertainment, super-assassin John Wick is back and on the run after killing a member of the international assassin's guild, and with a $14 million price tag on his head - he is the target of hit men ... END_OF_DOCUMENT_TOKEN_TO_BE_REPLACED
Top PicksView