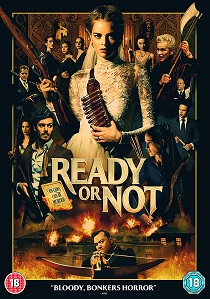 NewsComedyHorrorSamara Weaving
News Article Go back to homepage
The sanctity of marriage goes straight to hell when a young bride realises she is at the center of a lethal game of 'Hide and Seek' as Ready or Not is released on DVD and Blu-ray 10th February 2020 from Twentieth Century Fox Home Entertainment.
Samara Weaving, Mark O'Brien, Adam Brody, Henry Czerny, Andie MacDowell
Matt Bettinelli-Olpin, Tyler Gillett
Chad Villella
Twentieth Century Fox Home Entertainment
1 hour 35 minutes
10/02/2020
#ReadyOrNot
Thank you for supporting DVD365.net when you order using the link(s) below. As an Amazon Associate we earn from qualifying purchases
Buy DVD
Buy BD
Information

In Ready Or Not, the stakes are high as a newlywed literally fights for her life, trying to survive her in-laws in a deadly game of hide and seek on her wedding night. Samara Weaving (Three Billboards Outside Ebbing, Missouri, The Babysitter) plays Grace, a spirited young woman from modest beginnings who has been wooed by wealthy Alex Le Domas (Mark O'Brien, City on a Hill). Their 18-month courtship is culminating in a marriage ceremony at his family estate, where the mansion is imposing and so is the Le Domas clan, headed by Alex's parents Tony and Becky (Henry Czerny, Sharp Objects and Andie MacDowell, Four Weddings And A Funeral).

With a fortune built on board games, this eccentric family is bound by time-honored traditions. "The rich really are different," Alex's brother Daniel (Adam Brody, Shazam!) cautions Grace before she heads down the aisle. The wedding goes off without a hitch, but the carefully planned celebration has a detour mapped out for the bride.

Grace - still in her wedding dress - unsuspectingly joins her new husband and in-laws for a midnight gathering to play what they describe as a traditional family game. As a new member of the family, she must draw a card from a deck to determine which game they will all play - as danger lingers in the air, Grace unsuspectingly chooses the rare "Hide and Seek" card. With only a few moments head start, Grace is to leave Alex behind and stay hidden and quiet somewhere on the premises. The others fan out to find her before sunrise...

Soon Grace makes the terrifying discovery that she is being hunted in lethal blood sport. Pushed to her limits physically and emotionally, Grace becomes hellbent on not only staying alive, but attempts to change the game forever by fighting back in any way she can.

The DVD and Blu-ray is slaying with special features as writers Guy Busick and R. Christopher Murphy give insight on their script's exploration of the Faustian bargain made by the Le Domas family. Directors Matt Bettinelli-Olpin, Tyler Gillett and Producer Chad Villella explain how they used practical effects to deliver an authentically bloody film.

Ready or Not is released on DVD and Blu-ray 10th February 2020 from Twentieth Century Fox Home Entertainment. 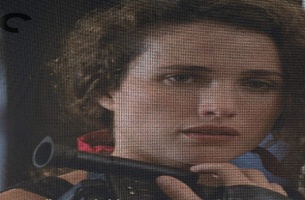