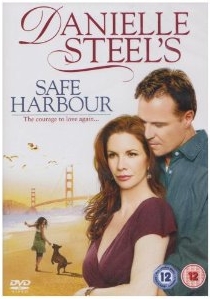 Entertainment In Video has announced the DVD premiere of Safe Harbour, a sweeping romantic drama adapted from Danielle Steel's best-selling novel. A powerful and life-affirming tale of love, grief and deception, it will be available to buy or rent as from 15th October 2007.

Melissa Gilbert (Little House on the Prairie, Nip/Tuck) stars as a grief-stricken mother and widow struggling to pick up the pieces of her shattered world in the wake of devastating tragedy. When an unexpected romance finds its way into her heart, she slowly begins to embrace her passion for life, motherhood and friendship again - only to learn that an unimaginable betrayal threatens to reopen the wounds she has worked so hard to heal.

Author of 102 novels - and with more than half a billion copies sold - Danielle Steel is one of the world's most prolific romance novelists. Since 1989, she has sold more than 23 million books in the UK alone, with many of her titles, including the two most recent, topping the charts. Her popularity also extends to the library rental market and according to statistics from The Reading Agency, she is officially the most rented adult author in UK libraries. Steel is even credited in The Guinness Book of World Records with having at least one novel on The New York Times' bestseller list for 390 consecutive weeks!

EIV will be promoting Safe Harbour alongside the publication of Steel's upcoming novel, Amazing Grace, which will be on sale in early November. The company is also planning to bring as many as 40 of Steel's other bestselling novels to DVD in the future.

Still reeling from the terrible accident that claimed the lives of her husband and young son less than a year ago, Ophélie Mackenzie (Melissa Gilbert), together with her 11 year-old daughter Pip (Liana Liberato), arrives in a small town in Northern California.

One day, Pip runs into a stranger at the seashore who amazingly begins to fill her childhood with splashes of colour and laughter again. The man is artist Matt Bowles (Brad Johnson), who sets his easel on the beach each day to paint the wild, windswept scenery of Safe Harbour. From the minute he meets Pip, Matt is transported into memories of another little girl: his own lost daughter.

When Matt offers to give Pip drawing lessons, Ophélie is taken aback, yet soon finds herself, not unlike Pip, drawn to this stranger - feeling more alive and hopeful than she has in a long, long time.

Slowly, carefully, Ophélie begins to open up to Matt. But, even as their relationship deepens and grows, the past will not let them go. Matt is forced to face the unfinished business of his former life, and Ophélie is rocked by a secret betrayal. Only this time, something extraordinary happens. In the midst of these turbulent and stormy times, Matt and Ophélie discover the only safe harbour left to them: love and trust.

UHD
Pixar Animation Studios serves up a breakthrough comedy with something for everyone as Ratatouille arrives for the first time on 4K Ultra HD 26th July 2021, exclusive to Zavvi. END_OF_DOCUMENT_TOKEN_TO_BE_REPLACED
Top PicksView