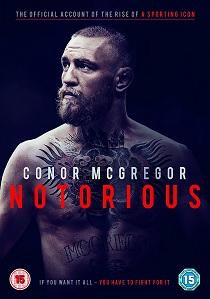 Follow one of sport's most unforgettable journeys as the unflinching and brutally honest documentary, Conor McGregor: Notorious, arrives on DVD, Blu-ray and Digital Platforms 20th November 2017 from Universal Pictures (UK).

Boxing since the age of 12, Dublin-born Conor McGregor has gone from a plumbing apprenticeship and a life on benefits to being the current UFC Featherweight Champion and the biggest fight sports star in the world. Just 29 years old and a pro-fighter since 2008, with 15 wins by knock out under his belt, McGregor is an icon to his faithful fans who remain absorbed by his peerless skill, his fearless attitude and his infamous swagger. Much more than that though, McGregor is a personality who is hard to ignore and is admired within and without the world of UFC for his unrivalled passion, dedication and commitment.

Conor McGregor: Notorious, filmed over the course of 4 years, is a gripping access-all-areas account of McGregor's personal and professional journey from claiming benefits and living in his mum's spare room with his girlfriend to claiming multiple championship belts and 7-figure pay packets. Featuring exclusive interviews, unprecedented access and fight footage, this is the ultimate behind-the-scenes look at a sporting icon and his meteoric rise.

Following McGregor from his transition as a largely unknown fighter to the status he currently enjoys, the film includes highlights from throughout his career including winning the UFC championship belt in just 13 seconds and his shock loss to rival Nate Diaz, culminating in his recent foray into the world of boxing and his record-breaking Las Vegas bout against Floyd Mayweather.

With all the controversy, candour and steely-eyed self-belief we've come to expect, Conor McGregor: Notorious offers an unprecedented glimpse into the public and private life of a man considered a hero by fans across the globe. A window into the world of one of sport's true individuals, this is timely, essential viewing.

From the producers of Shaun Of The Dead, Hot Fuzz, Scott Pilgrim Vs. The World and Paul comes Attack The Block, a fast, funny, frightening action adventure movie that pits a teen gang against an invasion of savage alien monsters. It turns a London housing estate into a sci-fi playground. A tower block into a fortress under siege. And ...
Movie quote