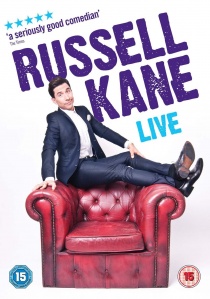 Following on from the success of his best - selling DVD Smokescreens & Castles, Russell Kane is releasing his highly anticipated second DVD, Russell Kane Live. The multi-award winning comedian, presenter, actor, author and scriptwriter takes to the stage for an exclusive, one-off performance that promises the same energetic, spontaneous and highly articulate performance that he has become synonymous with.

This never-to-be-repeated show recorded at the Vaudeville Theatre in London's West End is Russell's first DVD recording in four years, and will be available to own digitally from 16th November and on DVD from 30th November 2015. Don't miss the chance to watch one of the UK's most charismatic, energetic and downright funny comedians at the very top of his game.

Russell Kane Live promises the same high energy humour Russell has become famous for, as he takes the audience on a journey through the British people and their socially 'unique' ways. Russell examines everything from booze, love, sex, language and families - all without standing still... Oh, and expect the usual unscheduled banter and improvisation too!

Famed for his critically acclaimed tours, Russell has been performing sell-out shows across the globe, and was nominated four times at the prestigious 'Edinburgh Comedy Awards' before winning 'Best Show' in 2010. Russell then went onto make history as the first comedian to win both the 'Edinburgh Comedy Award' and Melbourne Comedy Festival's 'Barry Award' in one year.

Away from the stage, Russell has also established himself as a mainstay on our television screens as the host of three series of BBC3's Live At The Electric, regular appearances on BBC1's Live At The Apollo, BBC3's Unzipped, ITV2's Celebrity Juice and I Am Celebrity Get Me Out of Here Now.

Russell Kane Live is produced by Open Mike Productions and released by UPHE Content Group. Executive producers are Andrew Beint, Danny Julian, Joe Norris and Helen Parker, with Anthony Caveney and Mia Cross as producers and Chris How as director.