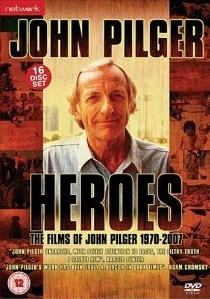 NewsSpecial Interest
News Article Go back to homepage
2008 incredibly marks John Pilger's fifty years in investigative journalism. Network is delighted to announce the release of Heroes The Films Of John Pilger 1970 - 2007, a sixteen-disc definitive collection of his documentaries replete with many special features.
Network
Unknown
27/10/2008
Thank you for supporting DVD365.net when you order using the link(s) below. As an Amazon Associate we earn from qualifying purchases
Buy DVD
Information

2008 incredibly marks John Pilger's fifty years in investigative journalism. Network is delighted to announce the release of Heroes The Films Of John Pilger 1970 - 2007, a sixteen-disc definitive collection of his documentaries replete with many special features including a biography and the acclaimed documentary series The Outsiders in addition to his latest film The War on Democracy.

Behind The Façade, a 3-disc set and fourth volume of the journalist's work is also released on 27th October 2008. "Heroes..." is the first, definitive collection of ground-breaking documentaries from John Pilger's career as a world renowned film-maker, author and investigative journalist. The title, Heroes, is taken from one of his films and his seminal book (1986), which celebrates the struggles and heroism of ordinary people all over the world.

Beginning as a journalist in his native Australia before moving to London, John Pilger is the recipient of multiple awards, including Britain's highest award for journalism, twice, and television academy awards in both the UK and the United States. He has been a foreign correspondent and frontline war reporter, and is a regular contributor to international media, including the ITV Network, the Guardian and the New Statesman.

An incisive and rare critic of Western economic and military power, Pilger's humane eyewitness reporting has been described as a unique presence on British television that explores where others dare not go. This 16-disc set brings together almost four decades of landmark journalism, including, for the first time, The Outsiders, Pilger's Channel 4 series of interviews, along with the award-winning cinema film The War on Democracy and an updated edition of Anthony Hayward's filmography of Pilger's work.

Behind The Facade contains 11 previously unavailable documentaries from John Pilger and is the perfect companion to the three volumes of the documentary maker's work already available from Network.