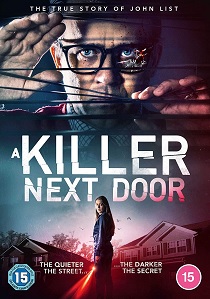 NewsThriller
News Article Go back to homepage
Based on the true story of John List, who killed his wife, mother and three children in their home in New Jersey then disappeared without trace, A Killer Next Door is released on DVD 15th March 2021 from 4Digital Media.
Nigel Barber, Derek Nelson, Tessa Wood, William Meredith, Harriet Rees
Andrew Jones
Rebecca Graham, Andrew Jones
4Digital Media
1 hour 30 minutes
15/03/2021
#AKillerNextDoor
Thank you for supporting DVD365.net when you order using the link(s) below. As an Amazon Associate we earn from qualifying purchases
Buy DVD
Information

On November 9th 1971, John List killed his wife, mother and three children in their home in New Jersey, then disappeared without trace. Eighteen years later, in a small town in Virginia, teenager Stephanie Hancock is confined to her home recovering from a broken leg. To pass the time she spies on her neighbours. It's all fun and games until things take a terrifying turn...

Stephanie begins to suspect that one of her neighbours, Bob Clark, is actually long forgotten family killer John List. Given the passage of time, his change in appearance and friendly demeanour, Stephanie struggles to convince her family of Clark's true identity.

Enlisting the help of her boyfriend Danny and best friend Melissa, Stephanie becomes determined to expose the truth. But the youngsters soon realise they've taken on more than they bargained for when the fugitive killer realises he's being watched.

A Killer Next Door is released on DVD 15th March 2021 from 4Digital Media.