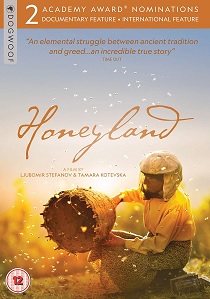 In a deserted Macedonian village, Hatidze, a 50-something woman, trudges up a hillside to check her bee colonies nestled in the rocks. Serenading them with a secret chant, she gently manoeuvres the honeycomb without netting or gloves. Back at her homestead, Hatidze tends to her handmade hives and her bedridden mother, occasionally heading to the capital to market her wares.

One day, an itinerant family installs itself next door, and Hatidze's peaceful kingdom gives way to roaring engines, seven shrieking children, and 150 cows. Yet Hatidze welcomes the camaraderie, and she holds nothing back - not her tried-and-true beekeeping advice, not her affection, not her special brandy. But soon Hussein, the itinerant family's patriarch, makes a series of decisions that could destroy Hatidze s way of life forever.

Honeyland is released on DVD and Blu-ray 24th February 2020 from Doogwoof.

HotDVDBD3D-BDUHD
The surviving members of the resistance face the First Order once again, and the legendary conflict between the Jedi and the Sith reaches its peak as Star Wars: The Rise of Skywalker is released on DVD, Blu-ray, 3D Blu-ray and 4K UHD 20th April 2020 from Walt Disney Home Entertainment. END_OF_DOCUMENT_TOKEN_TO_BE_REPLACED
Hot PicksView

A spiritualist medium holds a seance for a writer suffering from writer's block but accidentally summons the spirit of his deceased first wife in Blithe Spirit, an adaptation of Noël Coward's play released on DVD and Blu-ray 26th April 2021 from Universal Pictures (UK).
Movie quote