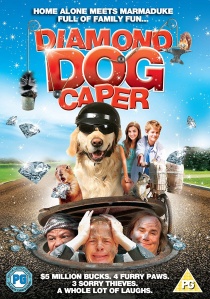 Diamond Dog Caper stars French Stewart from the hit US TV series Third Rock From The Sun and is a hilarious slapstick comedy caper for all the family which is released on rental and retail DVD by High Fliers on 11th April 2011.

It's the story of a young boy who rescues an abused dog from three jewel thieves only to find the dog is carrying a stash of stolen diamonds on his collar ... and understandably the bad guys will stop at nothing to get the dog back!

The villains are the notorious diamond thief Blackie (French Stewart) and his two dim-witted accomplices, Arty and Bud, who stop on the highway and are seen mistreating their dog by 12-year-old Owen. The boy intervenes to give the thirsty dog a drink but it escapes and heads off into the woods. Owen helps the angry crooks search for the hound but then decides to give them the slip so that he can search for the dog on his own.

Eventually he finds it and takes it to the secret toy fort that he's built and which he has ingeniously protected with booby traps and defence mechanisms to repel intruders. Furthermore, as an additional deterrent he has built his fort on top of the ridge where the feared 'Madman of the Mountain' is said to live!

Desperate to retrieve the five million dollars worth of stolen jewels that are embedded in the dog's collar, the villains eventually catch up with Owen and the hound and a terrific battle ensues. Can one kid with a booby trapped toy fort protect the dog from three very determined jewel thieves who want their stash back?

Well, yes, he can and as the bumbling crooks close in, Owen shows that he has one or two tricks up his sleeve, not to mention the Madman of the Mountain!!