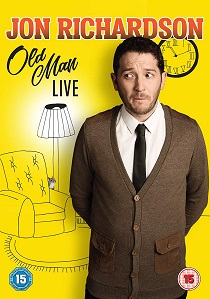 Jon Richardson, star of Dave's 'Ultimate Worrier' and team captain on Channel 4's 8 Out Of 10 Cats Does Countdown, plus runner-up in Heat Magazine's 'Weird Crush' poll (not once, not twice but three times!!) is ready to take on the state of the world, complain a little and offer absolutely no solutions in his brand new live stand-up show.

Released 19th November 2018 on DVD and digital download, Jon Richardson: Old Man Live sees one of the UK's favourite comedians return to the live comedy stage with his signature brand of side-splitting yet fastidious humour.

Old Man delves in to the last few years of Jon's life, bringing the audience along with him on the life-changing journey. Jon has left the perennial single life behind and become a husband and father, seen the UK vote to leave the EU and watched the rise of Donald Trump, all of which leaves him asking one question; why does it seem that no one else alive can correctly load a dishwasher?

Filmed on the final night of Jon's colossal critically-acclaimed 158 date sell out UK and Ireland tour at the historic Grand Theatre in Blackpool, Jon tackles all subjects and frustrations with his own distinctive perspective. No stone is left unturned as he hysterically takes on everything from haircuts, social media, weddings, pregnancy and the difference between the sexes, while providing some tremendous life tips along the way.