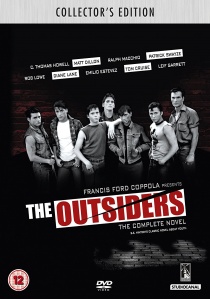 Set in Sixties Olklahoma, The Outsiders hinges on the eternal rift between the "greasers" - leather clad poor kids with Elvis style pompadours and their affluent preppy high school classmates, the "Socs" and the violent turf wars that escalate and tragically claim young lives.

Dallas Winston (Matt Dillon, Crash, Midnight Cowboy) leads his rebellious friends on a succession of typical teenage adventures, from committing petty crimes to flirting with Cherry Lane (Diane Lane, Unfaithful, The Perfect Storm), the trophy girlfriend of a hot-tempered soc. But when fellow gang members Johnny Cade (Ralph Macchio, The Karate Kid) and Ponyboy Curtis (C Thomas Howell, E.T, The Hitcher) have a run-in with their moneyed rivals, the stakes raised. Johnny kills a boy and goes on the run with Ponyboy, hiding out in an abandoned church with the help of Dallas, until an unexpected act of heroism brings them to justice

The Outsiders was originally brought to Coppola, looking for smaller, intimate projects after the epics of Godfather 1 & 2 and Apocalypse Now, via a letter from California high school class and their teacher, pleading for him to film their favourite novel.

More than twenty years later (and many more letters from young readers asking about the absence of their favourite scenes) Coppola revisited and restored the film and reintegrated 22 minutes of character-enriching footage including a new beginning and ending more true to S.E Hinton's original.

Also replaced is many parts of the original orchestral scorer by his father Carmine Coppola, substituted by music more appropriate to the era, including Elvis Presley, Jerry Lee Lewis and The Ventures. The cast were reunited to record a brand new audio commentary to reflect on their time making what became a career making film for all of them.